On a drought-stricken 4,000 hectare property ten minutes from Dubbo, in the central west of NSW, valuable white cypress oil is literally growing on trees.

It’s a lucrative product worth $1,000 a litre, and Cherie and Phil Thompson have been harvesting and distilling the essential oil from the native trees all year.

The oil is used in a range of skin and hair products they sell through their business Native Secrets. 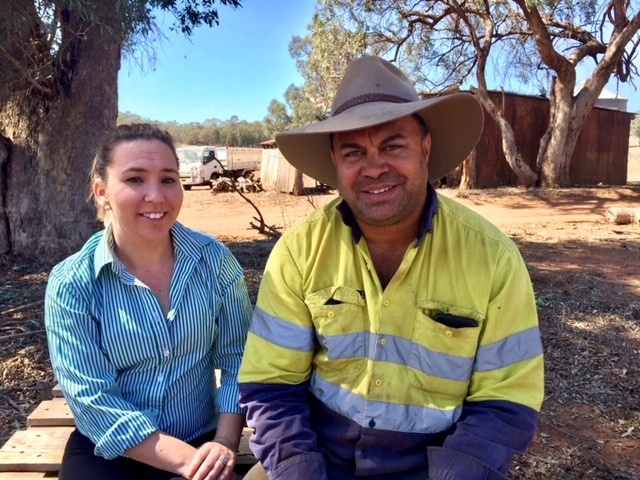 Cherie and Phil Thompson are building a business around native essential oils.

“We don’t know anyone else that’s extracting it commercially, so it’s quite unique and new on the marketplace,” Phil tells SBS while taking a break from collecting the oil in his work shed.

“It’s 100 per cent pure, no chemicals or additives. And the smell, it’s like a pine forest.”

Steam is used to extract the oil, which is then sent to Sydney to be refined. From there, it’s added to shampoo, conditioner and body lotions sold across Australia, and soon, at Singapore’s Changi airport.

Despite tough conditions for other farmers in the region, who are struggling to find water or selling off stock they can no longer afford to feed, Cherie and Phil’s crop grows wild in the bush and thrives in dry conditions. 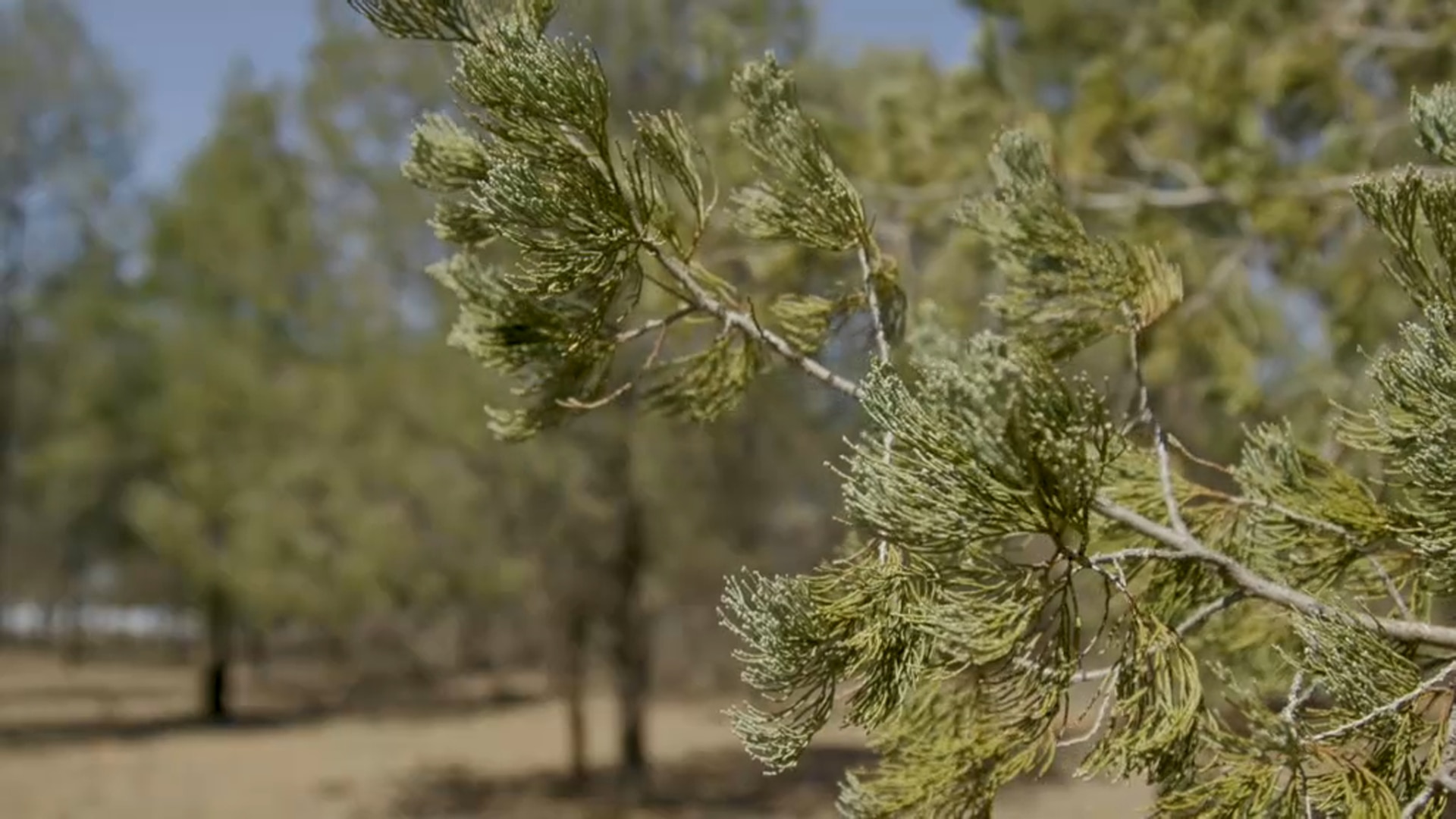 “During a drought, white cypress Callitris collumelaris makes more oil or fat reserves for itself naturally, because that’s how it’s adapted to survive over thousands of years,” Phil says.

“So for us, that means we can extract more oil and get higher yields. That’s what’s exciting.”

Phil and Cherie are among a rising number of Indigenous producers harvesting native ingredients, including foods such as bush tomatoes, Kakadu plums and finger limes.

For Cherie, 32, who only discovered her Indigenous heritage 10 years ago, working with native plants is a way to restore a connection with her Wailwan culture.

“My history was something hidden. I feel that’s because my great, great grandmother was a part of stolen generations and so it wasn’t something that my Dad spoke about,” she says. 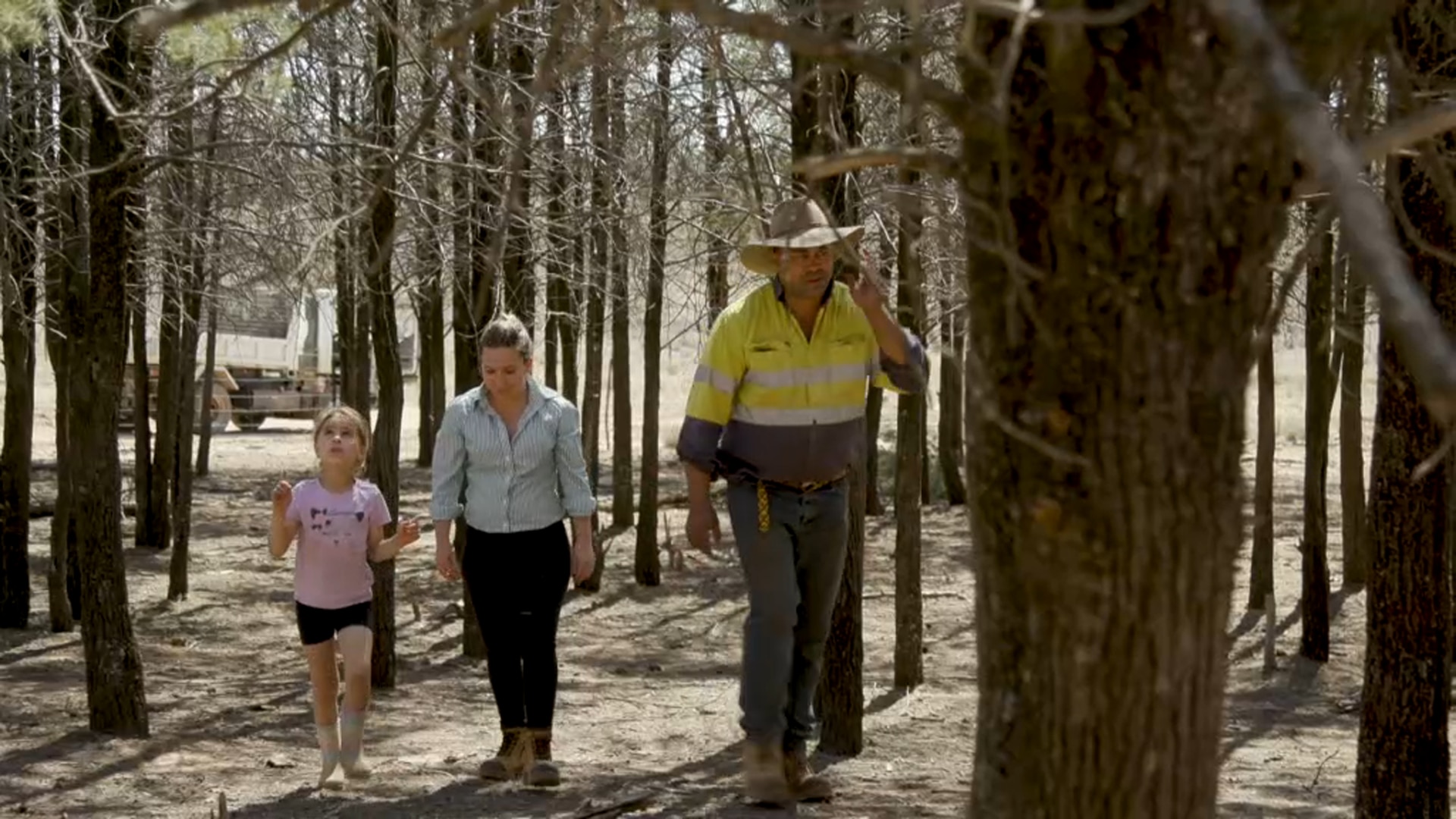 The couple plan to grow the business.

“It’s really important to have an understanding of the past and rekindle traditional knowledge.”

“Learning about medicinal uses of plants for our skincare, that knowledge is invaluable. And we want to pass it on to our kids, too.”

Dubbo is the traditional home of the Wiradjuri people, and Indigenous culture and history draws international visitors to the area.

Phil says local Indigenous people would use the oil from white cypress trees for wound healing.

“We would have heated this leaf on hot rocks or in a Coolamon (curved wooden tray) and when the oil was released, we would have wrapped it into a leaf on our sores,” he says.

“Now science tells us that this oil has anti-inflammatory properties.”

Phil, 43, is a Bidjara Kara Kara man from central Queensland whose experience with medicinal uses of native plants began while he was working at a mine in 2011.

“We talked with the miners about a particular plant called Gumby Gumby which is really good for eczema and psoriasis,” he says.

“And we made a liquid soap and it was a great way to start a conversation between the Indigenous and non-Indigenous workers.”

Some of the Native Secrets products.

When the Queensland mining boom ended five years ago, Phil and Cherie gradually made their way south to Dubbo where they now lease a house and workshed on dry, flat country, owned by a mining company.

And there’s another side to his work. It’s helping to restore ecosystems. By thinning clusters of white cypress, Phil is helping to restore fragile ecosystems.

“If white cypress growth isn’t managed properly, trees grow too close together. So rather than growing out and fat, they grow up thin and tall because they are competing for sunlight.”

“Once we thin the cypress clusters the sunlight gets back to the ground, and grasses come back, the lizards, bugs and beetles come back and the whole eco-system is restored. Even the grass parrots return.

Cherie works as a primary school teacher but hopes to soon work full-time in the business.

She is currently studying for a Master of Business Administration at UNSW and is also a graduate of the Murra Business Program at Melbourne University, which connects Indigenous entrepreneurs and teaches skills to grow their businesses. 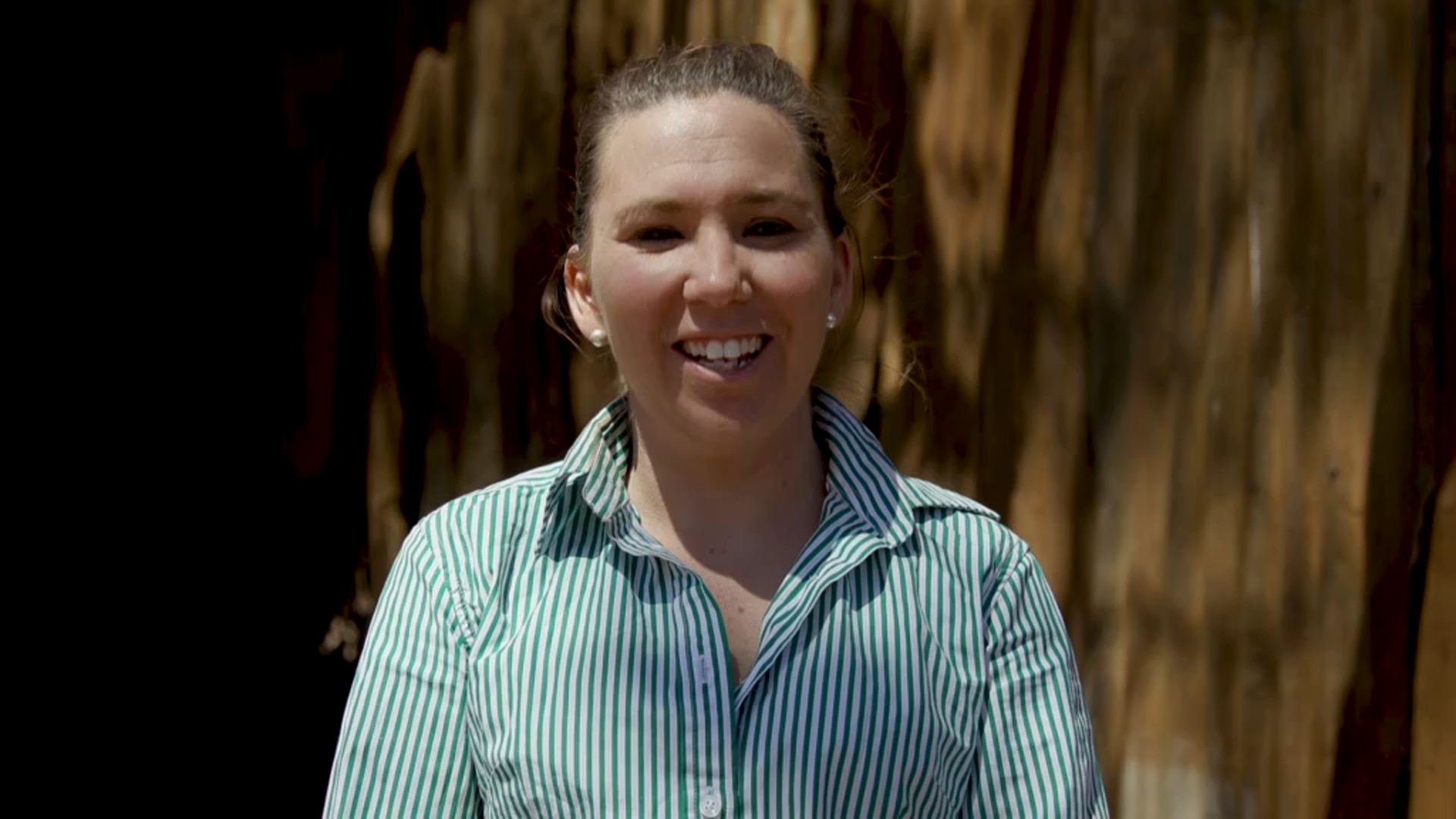 Cherie is studying for an MBA at UNSW.

“I did short courses in strategy, marketing and networking and it really developed my confidence as a businesswoman,” she says.

“Plus the networks and friendships it created are for a lifetime.”

“As a point of difference, their business stands out at a time environmental concerns are such a heightened interest in the world,” IBA’s Stella de Cos said.

“As an established business, Native Secrets was looking to grow what they were already doing well, so it was about their economy of scale.”

“We can export straight into a vending machine there,” Phil says.

“The feedback from Asia is that Australia is that it is seen as pollution-free, and this is a natural product, so they are quite receptive.”

“This oil has no added chemicals, its clean and green and not tested on animals. These days people want to know where the product is coming from and we can show them, here, because we control the supply chain from tree harvest through to manufacture.” 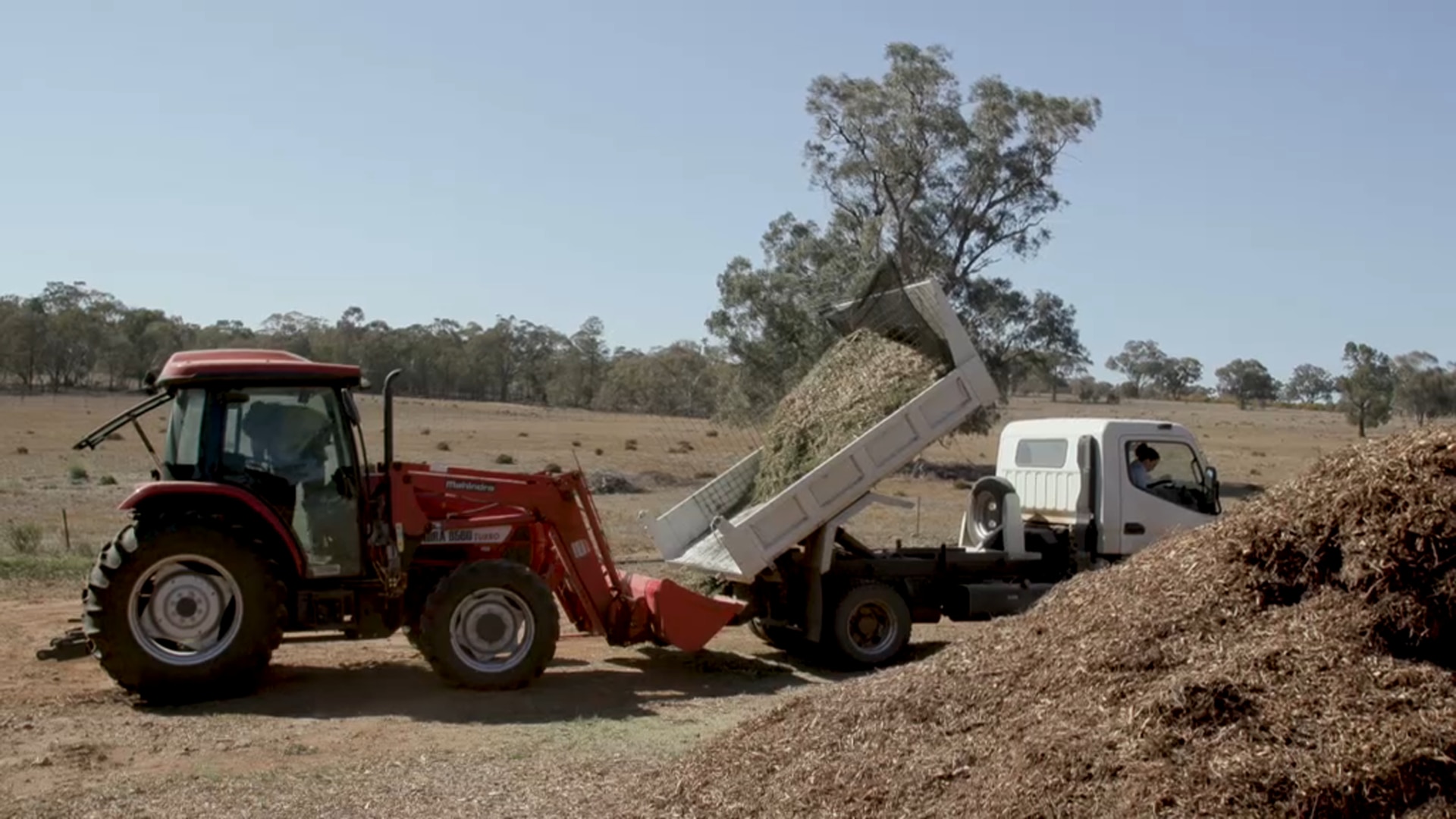 White Cypress branches are chipped to allow the oil to be extracted by steam.

The couple have big plans for their business.

“Our next step is to buy land for plantations of essential oils, bush food and medicinal plants, that’s our long term goal,” Phil says.

“We’d also like to roll this business model out with other Indigenous groups.”

“Everyone has a story about a medicinal plant or a bush food that they used as a child. And now we have the technology to extract it”.

Hello! Welcome to Leg Day Observer, an exploratory look at fitness, the companion to GQ.com’s Snake America vintage column, and a home for all things Leg Day. Ever squatted on an empty stomach? Or gone […]